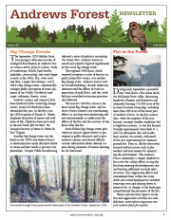 The September 2020 Holiday Farm Fire prompts reflection on roles of ecological disturbances in Andrews Forest science and its place in society. Study of windstorms, floods, bark beetles, landslides, clearcutting, and roads began as early as the 1950s. But, every now and then, a major disturbance—we’ll call it a big-change event—dramatically reshapes public perception of iconic elements of our Pacific Northwest landscape: volcanoes, forests, rivers.

Andrews science and scientists have been involved in four recent big-change events, several of which have been chronicled this year. In the first case, the 1980 eruption of Mount St. Helens displayed the power of nature and resilience of life, which has been portrayed in the new book After the Blast: The Ecological Recovery of Mount St. Helens by Eric Wagner.

Another big-change event was the battle in the 1990s over federal forests to determine how much old native forest to retain and how much to put into tree plantations. Oregon Public Broadcasting released a series of podcasts recounting The Timber Wars. Andrews Forest research and scientists figured significantly in this social big-change event.

The regional 1996 flood, which renewed attention to roles of forestry in peak stream flow events, was another big-change event. Andrews Forest studies of road hydrology, already underway, demonstrated the effects of roads on generation of peak flows, and this work fed into watershed restoration practices that followed.

The massive 2020 fire season is the most recent big-change event, and Andrews Forest scientists are coordinating efforts to use long-term monitoring and new measurements to understand the effects of the fire and the recovery of the forest after the fire.

Each of these big-change events give scientists unusual opportunities to participate in public discourse and to give attentive citizens and elected officials current information about relevant science during moments of intense learning for all concerned.

Fire in the Andrews Forest

During early September a powerful east wind drove a fire storm down the McKenzie River valley, destroying hundreds of homes and businesses and ultimately burning 173,000 acres of forest land of mixed ownership, including more than 400 acres of the lower part of Andrews Forest. In the first several days, when the majority of the area burned, extreme weather conditions led to high burn severity. As the Holiday Farm Fire burned through experimental watersheds 9, 1, and 2 in subsequent days and weeks, burn severity was mixed, with much of the area experiencing low intensity ground fire. Even so, the fire destroyed research infrastructure such as plot markers and instruments for monitoring the environment. The Andrews Forest community is deeply thankful to fire crews for valiant efforts to stop the fire from entering the headquarters site and burning additional research infrastructure. Fire suppression efforts and containment lines within the watersheds and around headquarters included removing trees and clearing down to mineral soil, so changes to the landscape extend beyond the perimeter of the fire.

Photos and narrative reports on the fire and suppression activities are available at andrewsforest.oregonstate.edu/news/andrews-forest-fire-updates

Letter from the Leadership

This is our first newsletter on the heels of the Holiday Farm Fire. The fire displaced our staff, burned a portion of the Andrews Forest, and is prompting our research imaginations in new ways. Fire has played a central, but deeply paradoxical, role in our lives. We harness it to great use, yet we suffer mightily when we fail to control it in just the right way. Allowing it to run across our landscapes creates problems, but we also suffer when we prevent it from touching our landscapes. Fire has always been a part of the Andrews Forest ecosystem, but that fact is cold comfort when it is our forest on fire and when it is our Andrews Forest family at risk.

The role of fire in our world has an ancient history. Ancient Greek philosophers ~2500 years ago engaged in what we might now consider a scientific exercise: trying to decipher the ultimate stuff of the universe, that substance which is primary, which explains all else, which is constant yet evident in the obvious change we see all around us. Heraclitus posited that fire was this ultimate and most rudimentary element making up the world. Fire alone was powerful enough to shape the world. Interestingly, this search for the ultimate reality, was also the search for the divine, for the source of the sacred. Because fire is both sacred and the fundamental substance of the world, by extension the world also becomes sacred.

I wonder, can we imagine, or re-imagine, our world? Does fire give us the opportunity to reimagine a world that is sacred (“sacred,” from the Latin sacrare, meaning to set apart, to make holy, to immortalize). The study of fire is a perfect example of the necessity of interdisciplinary research extending far beyond the sciences. Our community of researchers is perfectly poised for just such efforts. And in this world of change, and fire, and the sacred, can we reimagine our own place as well? 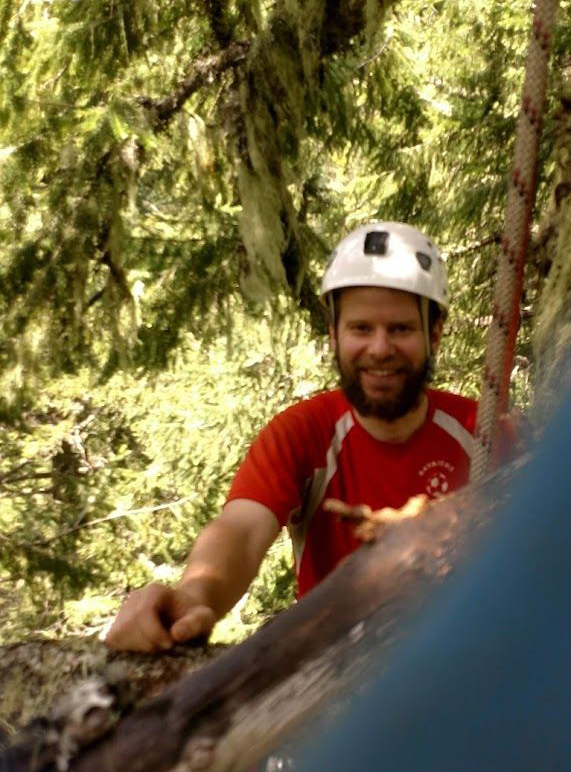 Adam Sibley is a PhD student with Chris Still in the Forest Ecosystems and Society department at OSU. He has worked at the Andrews Forest for the past four years doing research on tree canopy microclimates and the physiology of tall trees. Adam focuses on how long plant surfaces stay wet from rain and dew throughout the year and at different heights in the canopy. Surface wetness is important to the health of mosses, liverworts and lichens, all of which slow the transit of water through the forest and contribute to longer lasting evaporative cooling. Adam has also focused on quantifying the uptake of dew water by Douglas-fir foliage, an often overlooked mechanism for relieving water stress. Adam helped artist Leah Wilson climb trees in support of her art work, now installed in the Peavy Forest Science Center at OSU.

A new research project at the Andrews Forest aims to shed light on how changes in temperature and precipitation affect patterns of biodiversity. The Forests of Oregon Elevation Gradient (FOREG) is a network of large sample plots (8 to 25 acres), established in 2019, within the Andrews Forest. Field studies and experiments will test the importance of species interactions to changes in biodiversity across the landscape. The FOREG project was designed to dovetail with the long-running Permanent Study Plot (PSP) vegetation study at the Andrews Forest. FOREG is also a part of the broader Smithsonian Forest Global Earth Observatory program.

The FOREG study is run by Joseph LaManna, an assistant professor at Marquette University in Milwaukee, Wisconsin. Joe hopes to combine long-term data from the PSP plots with more detailed demographic data from the larger FOREG forest plots and lidar scans of the entire Andrews Forest watershed to better predict responses of forest tree populations and biodiversity to climatic changes.

In the coming years, Joe will be coordinating with Posy Busby, Dave Bell, Andy Jones, and Dave Shaw to investigate the role of species interactions, especially between trees and their below- and aboveground fungal pathogens and mutualists, in driving patterns of forest biodiversity. The researchers will inoculate tree seedlings with fungal communities associated with adults of different tree species to determine how adults influence seedling survival through their fungal associates, across different environmental contexts.

Photos of Joe and his field work are at https://andrewsforest.oregonstate.edu/gallery/forests-oregon-elevation-gradient-foreg-2019

When big disturbances occur, distinctive roles of the National Forest can kick in, especially in the case of fire. The Willamette National Forest (WNF) was faced with three massive fires this September, including the Holiday Farm Fire, which burned into the Andrews Forest. Coordination between fire fighters and Andrews Forest staff concerning fire suppression and containment activities was essential in protecting research installations and managing safety issues for fire crews, such as propane tanks at the stream gaging stations. The work done over the years to strengthen relationships between the Andrews Forest and the WNF facilitated rapid response and an understanding of the resources at risk. The challenges don’t stop with stopping the fire. Next come efforts to repair suppression activities (e.g., dozer and hand lines) and effects of the fire itself. In some cases, WNF personnel are doing these jobs, despite being evacuated from their homes or losing them entirely to the fire. The Andrews Forest community is deeply, deeply thankful for the major and effective efforts of the Willamette National Forest to protect the Andrews Forest headquarters site and other parts of the research forest.

The Andrews Forest Program is a community of many things—scientific researchers, land managers, arts and humanities scholars—and a community dedicated to a specific place. But we are also a community of giving. During the recent fires we raised $12,000 in two days to help out our displaced family members. “The generosity of the Andrews community moved me to tears,” said USFS Science Liaison Cheryl Friesen, who lost her home in the fire. Brenda Hamlow, the Andrews Forest site manager wrote, “The kind words and generous donations mean so much to every employee impacted by this fire, thank you.”

We are thankful, too, for the donations to support our recovery and research efforts after the fire, and for the anonymous donation of $50,000 to create lasting support of our work.

Donate
Reflections—“Listening to the Forest”

Eugene visual artist Leah Wilson has practiced her craft inspired by the Andrews Forest since 2012. She won the commission in the One-Percent-for-Art competition to create the major interior art piece in the new Peavy Forest Science Center building on the OSU campus. This work makes art-science connections in several innovative ways through close collaboration with scientists. And its representation of the cellular structure of wood, but without wood surfaces themselves, stands in sharp contrast with the rest of the interior of the lobby dominated by massive, rectangular wooden beams.

Leah’s work of acrylic and resin on laser-cut wood panels of wood from Douglas-fir, red alder, yew, and hemlock trees covers two stories of a wall in the main lobby. Four 46” X 62” panels arranged vertically are based on samples taken near the top, middle, and base of each tree bole and a root sample is at the base. The bottom edge of each panel traces a week of environmental data from the hyper-instrumented Discovery Tree near the Andrews Forest headquarters site—air temperature, leaf wetness, dendrometer, and soil temperature. Leah picked the week of environmental data to center on a date when she climbed the tree with the aid of graduate student Adam Sibley. One objective for the tree climbing, which was done in each season, was for Leah to connect directly and physically with her subject matter. www.leahwilson.com/project/listening-to-the-forest 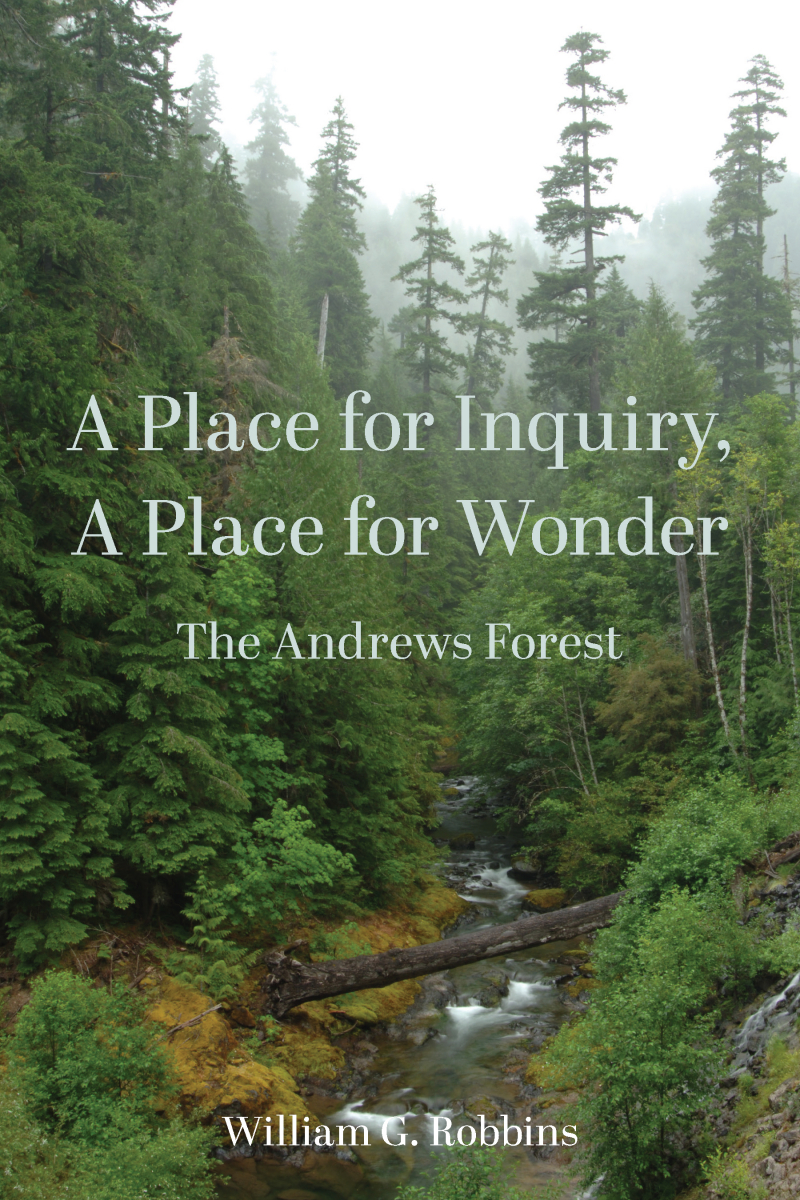 The book A Place for Inquiry, A Place for Wonder: The Andrews Forest by retired OSU History Professor Bill Robbins has just been published by Oregon State University Press. Drawing on print materials, oral histories, conversations, and his own ramblings in the forest beginning in 1964, Bill offers a thorough account of the place; its programs of research, education, partnership with land managers, and arts/humanities; and the people of the Andrews Forest, in this elaboration of his 2018 article in the Oregon Historical Quarterly.  Bill makes a greater effort than earlier historical accounts of the Andrews Forest program to put the work in its larger and continuously evolving societal and political contexts, which both influenced and were influenced by discoveries at the Andrews Forest. He recounts stories concerning watershed science, characterization of old growth, and the northern spotted owl, and extends the account to the current cast of characters and projects. It’s a good read.