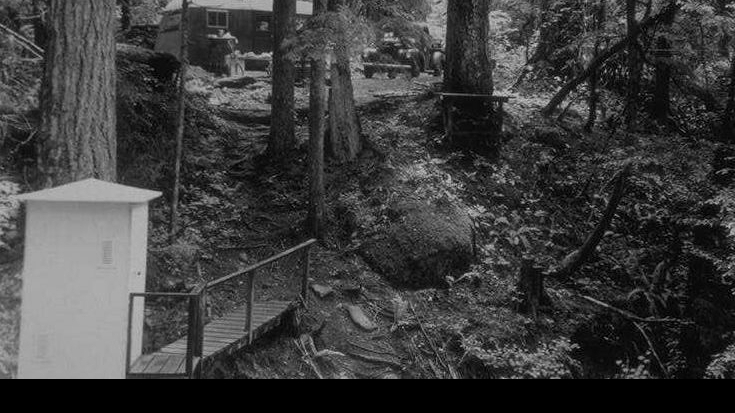 The USGS gage on Lookout Creek at the H.J. Andrews Experimental Forest. Photographed in 1952 by Don Wustenberg.

Over more than seven decades since its inception, the Andrews Forest Program at the H.J. Andrews Experimental Forest has witnessed a diverse and impactful research history, with major research foci changing over time. Efforts in the 1950s concentrated on increasing efficiency of forest operations, such as forest regeneration, road engineering, and logging systems appropriate for old-growth forests. Also, beginning in the 1950s, USFS scientists initiated three sets of experimental watersheds designed to study the effects of logging on hydrology, sediment yield, and nutrient losses. Treatments included clearcutting and partial cutting, and one watershed was left in its “natural” forested condition as a reference watershed.

During the 1970s, with funding from the National Science Foundation (NSF), the International Biological Program (IBP) supported collaborative research to examine old-growth and managed forest and stream ecosystems. With IBP funding, a large, interdisciplinary team of academic researchers mainly from Oregon State University, joined USFS researchers to study carbon and nutrient fluxes, forest succession, disturbance ecology, the full diversity of plant and animal species, and many other topics. Establishment of a system of forest plots (reference stands) and many other programs of environmental monitoring were created during the decade which provided a foundation for long-term ecological research.

In 1980 scientists with Oregon State University and the USFS were awarded research support from the National Science Foundation; the program became a charter member of the NSF-sponsored Long-term Ecological Research (LTER) network. The LTER program supported the continuation of long-term studies and environmental monitoring (e.g., climate, streamflow, water quality, population dynamics of sentinel terrestrial and aquatic species, vegetation succession, and disturbance events). New long-term experiments were established under LTER, such as the monumental 200-year log decomposition study established in 1985. In the 1990s, Andrews Forest scientists and Willamette National Forest staff partnered to develop studies at the landscape scale and silvicultural experiments at the stand scale.

Connections with society intensified greatly in the late 1980s as earlier research on old-growth forests, northern spotted owls, and watersheds became central to ongoing political conflicts over the future of federal forested lands.  Andrews Forest Program science and scientists played important roles in many land management and policy deliberations, and the long history of research-management collaboration with the Willamette National Forest was critical in helping formulate new approaches to forestry.  Social scientists began working within the Andrews Forest Program in this period, and early in the 2000s, creative writers, artists, and others from the humanities, became engaged (see the Arts and Humanities section of this webpage).

Presently, the major research themes at the Andrews Forest Program continue to include disturbance processes, landscape and water dynamics, carbon sequestration and fluxes, biological diversity, forest-stream interactions, spotted owl demography, soil and watershed processes, and the cultural dimensions of forests and watersheds.  Analyses of long-term data reveal environmental trends over time in relation to climate, succession, and other factors.

The history of the Andrews Forest Program, like that of any long-term ecological research program, has revealed important knowledge for society and provoked questions about humankind’s relationship to the world.  An inventory and archive of historical records of the Andrews Forest Program is designed to encourage history scholarship about development of the research, education, and outreach components of the program.

For oral histories of many scientists, land managers, and administrators associated with the Andrews Forest Program go to the "Voices of the Forests, Voices of the Mills" collection at the OSU Library.

Learn about our long-term and long-running Experimental Watersheds, Gauging Stations, and Climate Stations 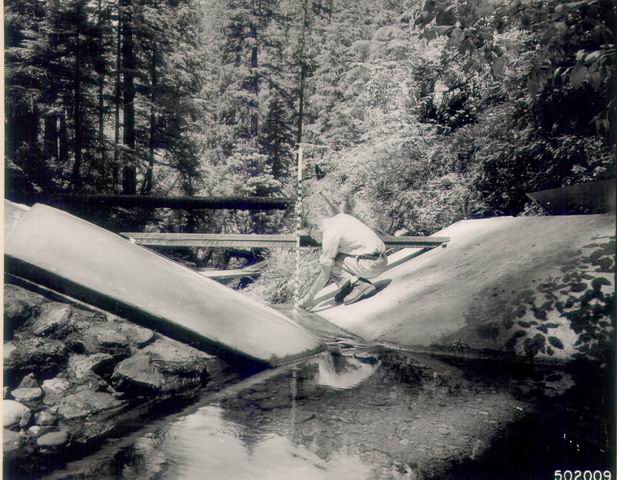