Taking the temperature of forest canopies 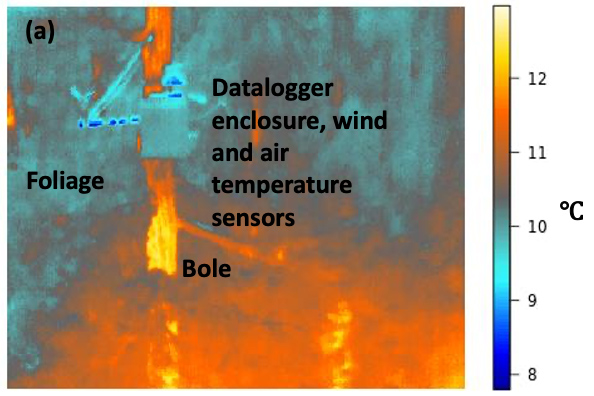 Temperature is a primary control on ecological systems and processes, ranging from enzymatic reactions to tree growth. Temperature is also a fundamental characteristic of climate. Indeed, much of the concern about the impact of climate warming on ecosystems is motivated by the pervasive influence of temperature on organisms like plants. Although scientists often focus on air temperature, the actual temperature of a plant is more relevant; a plant’s temperature can depart from air temperature by 10-20 degrees Celsius. By mounting thermal cameras in trees, we can take trees’ temperatures directly using technology similar to what is found in night-vision goggles. The patterns that appear in canopy thermal images are interesting. For example, we see typically warmer trunks and branches and cooler leaves. Also, we see that the thermal patterns change rapidly throughout the day due to solar radiation, wind, and transpiration.

In a recent paper, researchers used canopy thermal images to understand connections between tree canopy temperatures and biological processes like photosynthesis, as well as the response of trees to heat waves and droughts. Thermal image data from an old-growth Doug-fir canopy at the Andrews Forest were showcased in the paper to highlight nighttime radiative cooling that leads to dewfall in the upper canopy, potentially ameliorating drought stress in the rainless summer at this site. Continued monitoring of tree canopy temperatures at the Andrews Forest is planned. New thermal imaging using drones will capture thermal data of forests of different ages and at different positions on the landscape such as along north- or south-facing hillslopes and proximity to streams.