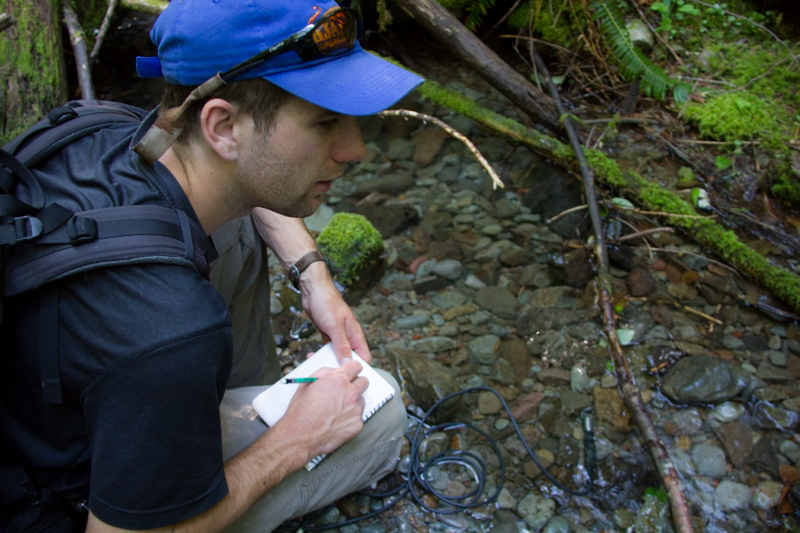 Matthew Kaylor, a graduate student at OSU, worked with two undergraduate summer field assistants and their advisor, Dr. Dana Warren, to pull together pieces of a story on how salamanders and trout are affected by drought.

A recent publication out of the HJ Andrews Experimental Forest LTER site illustrates the role that summer research experiences can play in contributing to LTER science and in engaging and mentoring students. Oregon State University graduate student Matthew Kaylor is the lead author on a paper about how trout and salamanders respond to drought. Kaylor wrote this paper in collaboration with two undergraduate students. The first student, Brian VerWay, worked with Kaylor to survey trout and salamanders in a set of streams in the Andrews Forest in 2014 and 2015. As it happened, 2015 was a severe spring/summer drought year in the Pacific Northwest region. VerWay wrote his senior undergraduate honors thesis and published a paper on the movement, growth and abundance responses of fish to drought in one tributary stream of the Andrews Forest (VerWey et al 2018). In 2016 and 2017, the second student, Alvaro Cortes, revisited six of the stream sites that Kaylor and VerWay had surveyed. Cortes wrote his senior theses about the recovery of fish and salamander populations from the 2015 drought. The three students worked with their advisor, OSU Assistant Professor Dana Warren, on a paper that pulled together their research into a broader story. The paper, “Drought impacts to trout and salamanders in cool, forested headwater ecosystems in the western Cascade Mountains” was published in Hydrobiologia. Their findings suggest that drought impacts salamanders and trout, but the responses differ. They found fewer adult trout in the drought year. Salamander abundance remained the same, but body condition was lower in the drought year. Both trout and salamander populations seemed to rebound within two years of the drought. The work could not have happened without strong leadership and mentoring by the graduate student, nor without the engagement and interest of the undergraduate student researchers. It was a collaborative exercise that reached across multiple years of data collection and multiple projects at the Andrews Forest LTER site.